Pycnogenol is a powerful antioxidant that can help with a variety of conditions. The question is: Should you include it in your diet to help improve your brain function?

Unlike many “natural” supplements, Pycnogenol is an extract that is actually a registered trademark of a company called Horphag Research. It is also not one of those herbal supplements that was in use in folk medicine for hundreds of years prior to its use today.

Quick Navigation
What Does Pycnogenol Help With?
Pycnogenol Supplements for Improved Cognitive Function
Do You Need to Take Any Precautions with Pycnogenol?
Pycnogenol May Be a Good Option if You Want to Improve Your Mental Performance

Of course, the term “natural” is relative. Many supplements and health food products that are labeled “natural” really aren’t when you look at how much processing it takes to turn them into a consumable supplement.

For example, you can get the health benefits of broccoli sprouts by taking a commercial broccoli sprout supplement, but is it really “natural”? The supplement may come in the form of a capsule, which requires fillers and binders to maintain the capsule shape. So, there is really not that much that is actually “natural” in a supplement such as that.

That said, when we talk about “natural” supplements, we are often talking about using herbs or plants in a form that is closer to nature than what you might get in a commercially developed pharmaceutical drug.

Pycnogenol is one of those substances that is that sort of “natural” – it is an extract of the bark of a maritime pine (Pinus pinaster) found primarily along coastal southwest France.

A German scientist named Charles Haimoff discovered Pycnogenol and began research into the substance in 1965. The supplement was first sold in Europe in 1967, but it did not start to reach any sort of major markets in the United States until 20 years later.

What Does Pycnogenol Help With? 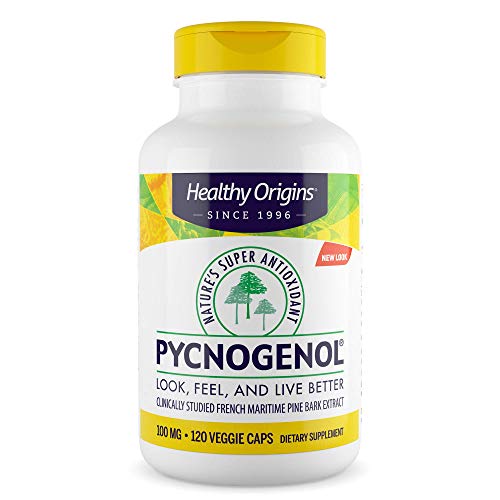 Pycnogenol has been studied extensively over the span of 40 years. In fact, more than 400 published studies and reviews have been conducted to determine its usefulness and safety. Now, you can find pycnogenol in more than 700 products, from nutritional supplements and vitamins to cosmetics. It can help with:

For example, pycnogenol can help improve the strength of our blood capillary walls (these are the smallest blood vessels in the body). This can help people who are suffering from chronic venous insufficiency (CVI) and anyone who has vein problems in the legs.

If you are looking for a safe supplement to help with boosting brain power, pycnogenol might be a good option for you.

Many other supplements are touted as boosting mental performance, but they have really only been tested (if at all) on severe cognitive diseases like Alzheimer’s, not on healthy, young people.

Pycnogenol has actually been shown in a clinical research study to enhance memory and increase test scores in college students. It was also shown to lower test anxiety by 17 percent.

The pine bark extract can also help with ADHD and other attention deficit disorders in children.

Do You Need to Take Any Precautions with Pycnogenol?

Pycnogenol is relatively safe, but you should always talk to your doctor if you are mixing supplements with other types of pharmaceutical medication.

In particular, pycnogenol may thin the blood, so taking this pine bark extract supplement might not be advised if you are on blood thinning medication such as Coumadin (aka warfarin).

Also, despite the high number of studies done on this powerful antioxidant, some critics say that not enough independent studies have been done yet to truly ensure safety.

Taking any additional supplement always has some amount of risk, even if it is a very small, tiny amount. Work with your healthcare provider to determine what might be best for you.

The bottom line: pycnogenol has been generally proven to be a safe and effective supplement with powerful antioxidant properties. It has been shown to improve test scores in college students. As a brain boosting supplement, it might be a good option for you.