Andographis: What is It and Should It Be in Your Diet?

Andrographis, also known as ​andrographis paniculate (pinaculata), is another herbal remedy you might want to have in your holistic health toolkit – with some caveats.

Andrographis paniculate has been used for thousands of years in the traditional medicine systems of India (known as Ayurveda) and China. The Indian name for the herb when used in Ayurveda is Kalmegh or Kalamegha, which means “dark cloud.” It has a very bitter taste. In some traditional medicine systems such as Ayurveda, the type of taste associated with a food has certain properties that can help with various disorders.
The bitter flavor in Ayurveda is said to reduce the qualities of “Pitta” and “Kapha” while increasing “Vata.” Therefore, it would be helpful in treating illness that are the result of increased Pitta or Kapha, which could include inflammation and fever (Pitta) and congestion (Kapha).
The andrographis paniculata plant can be found in the wild in India especially, and many other countries, including Thailand, Indonesia, Malaysia, and even the Bahamas.
The great thing about this herb is that it can grow in a variety of conditions, from wet to dry, in many different types of soil.
In traditional medicine systems such as Ayurveda, people have used all parts of this plant as a health tonic, from the leaves to the very roots.

What are the Benefits of Consuming Andrographis Paniculate?

Andrographis paniculate has not been very well studied by Western science. It shows some promise in improving health based on some limited studies. The herb is said to be anti-inflammatory, and it also can apparently help fight bacteria and viruses.
For this reason, it is supposed to be an excellent remedy to help battle the common cold.
Other traditional uses of andrographis paniculate include the treatment of:

Modern Western science is now looking into andrographis and some of the studies are very promising. There is definitely evidence to support the reputation that this plant has as a means to fight the common cold. It also can help boost the immune system.
(Note: Because of these immune boosting properties, people with auto-immune disease are advised not to take andrographis paniculate unless approved by a doctor first.)
What is perhaps most exciting and promising is that the herb may be helpful in fighting many different types of cancer.

What Does Andrographis Paniculate Do for the Brain?

If you are interested in the potential brain-boosting properties of andrographis, not much is really known. This was not a traditional usage of the plant.
Of course, anything that is anti-inflammatory has the potential to help improve cognitive function...and we all know that trying to think clearly when we have a bad cold can be quite challenging (and frustrating).
One study on mice did find that andrographis paniculate significantly reduced inflammation in the brain. The herb may also help people with diabetes who are suffering some cognitive deficits due to their disease.
However, there is some evidence that this herb can actually damage the blood-brain barrier, so more information is needed about what effects it really has on the brain.
Not much information is available about whether andrographis can have any sort of positive effect on the brains of healthy people.

How Do You Take Andrographis Paniculate?

If you are interested in taking andrographis paniculate, you have many different options. First, you should understand that in traditional medicine, andrographis was not an herb that people took every day casually. The local traditional medical doctor may have “prescribed” the herb for a specific period of time or until the illness had passed.
Without a lot of information done on the long-term effects of regular andrographis usage, you should probably not be using it as a daily food. Also, it may lower blood pressure and have other side effects.

If you are taking Western medicines, you should talk to your doctor before adding andrographis paniculate to your diet.

So, what are the ways you can take this potent herb?

The traditional way of consuming andrographis is in tea form as well as tinctures. If you go to an herbalist, they may create the tea or tincture for you.

You can buy andrographis paniculate over the counter as a supplement from health stores and online shops. 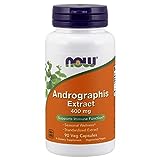 Bottom Line: Should You Use Andrographis Paniculate for Brain Boosting?

Given the very little evidence that andrographis paniculate is safe for daily use, and the lack of information on what it might do to boost the brains of healthy people, it is not recommended as a brain booster. Use it temporarily if you have a common cold.